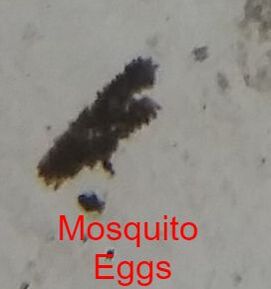 If you're raising predatory amphibian larvae, you're likely to need live foods of varying sizes as the larvae grow. There is a lot of information out there on the subject, but I found much of it confusing or misleading, so what I'll give you is based only on my personal experience.

Live foods for predatory amphibians from smallest to largest:
Microworms: These are nematodes that are barely visible and appear of patches of worms when you look in good light and at the correct angle. The good news is they reproduce quickly and are very small. The bad news is they are very small and some people have questioned their nutritional value. Like anything else, raising them in a higher nutrient environment will likely pass greater nutrition  onto your animals, but this food source is probably best used only initially or as a backup to one of the larger food items.
Daphnia Moina: These are about the same size as brine shrimp and have the advantage that they will live in fresh water until eaten. The bad news is that my culture didn't produce enough to use them as the primary food source. They are probably an excellent food source but I would suggest starting a couple of cultures before you need them and have a backup food source.
Brine Shrimp: Although a lot of people say brine shrimp are too much work, I did not find them to be any work at all. I purchased one of the kits for a 2 liter bottle (see here), so perhaps not fighting with a DIY system just made it feel easier to me. The other complaint I have heard is that pet store eggs are often old and no longer good. I purchased eggs off Amazon (specific brand linked here) which appeared to have a good hatch rate.  With my temperatures just under 80F, I was getting a batch every 24 hours. The only complaint I have is the brine shrimp net let the majority of brine shrimp go through it. I fixed this by placing an unused coffee filter inside the brine shrimp net and then rising them off in that filter with fresh water before feeding.  I found brine shrimp to be the easiest way to produce a large number of small food items.
Russian Red Daphnia: These did better for me than Moina and produced large numbers of daphnia. The adults are a medium sized prey item, probably as big as a mosquito pupae. The babies are about the size of a Moina adult. I just kept them in a bucket of green water and changed out some of the water with pond water every couple of days. I would highly recommend a culture of these very useful creatures.
Mosquito Larvae: These are a useful food source while are relatively small when they first hatch but will grow to a medium sized food item over time. I found the claims of how easy it was to get them to lay eggs untrue in my case. I would recommend putting out the collection container well before they are needed to perfect the technique for your area. Although my attempts to get them to lay eggs did not go well, I did incidentally collect a few as well as find and harvest some egg rafts here and there.
Grindal Worms: I found these to be an excellent food source for larvae graduating away from brine shrimp but still too small for the majority of whiteworms. I kept them in eco earth and fed them cat food. There are many different ways to harvest them but I just took some of the eco earth located near the food and put it in a cup with some water. A concentrated pinch of the soil near the food source will contain many worms which are considerably smaller than whiteworms and are a useful food source.
Midge Larvae or "Bloodworms: These incidentally turned up in one of my daphnia cultures. They seemed to concentrate in duckweed and took a little time to pick out. I never got them in huge numbers but they certainly do provide dietary variety and there would be several worms in a cup of water taken from the bucket. They seem to be reliably present just never in enormous numbers for me.
WhiteWorms: These are a worm that go from the size of an adult grindal worm up to fairly long maybe over 2", but they remain thin. I have read that they do not do well at warm temperatures so I have mine in a cool basement and they are doing well and reproducing.  I found these less useful than grindal worms initially because I could begin feeding the grindal worms successfully much sooner. The newt larvae would spit out the whiteworms if they were too long. However, they became more useful later due to their larger size. I would recommend keeping a culture of each.
Things that did not work: Trying to capture my own miniature live foods from lakes, ponds, or ditches.  While I did manage to capture a minuscule amount of such food items, it proved to be an unsatisfactory way to obtain the bulk of the food items I needed.

See below for images of midges and videos of brine shrimp and Russian Red Daphnia. 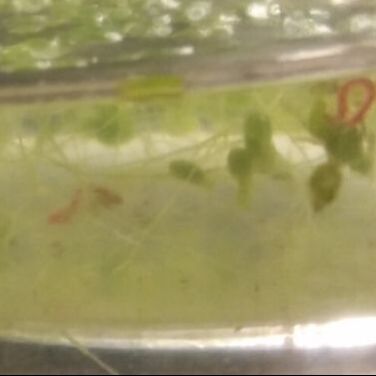